Why attend a landscape photography workshop?

Flat light in landscape photography – what is it?

Very few of us start with sunrises, why? Well, easy, we don't get up from bed in time. As you learn about the importance of light in landscape photography, you’ll soon get out of bed early. But that’s another story.

My first sunsets were a mess of orange and black. The warm colors from sunsets certainly get noticed, but there was something wrong with the photos. The rest of the landscape, the trees, and the mountains were completely black, with no details.

I could not figure out which camera settings to use to get the whole scene evenly lit. So, I started the search for the magical exposure setting. As I experimented with aperture and shutter speed, I believed there had to be a magic combination of the two that would give me a good exposure. 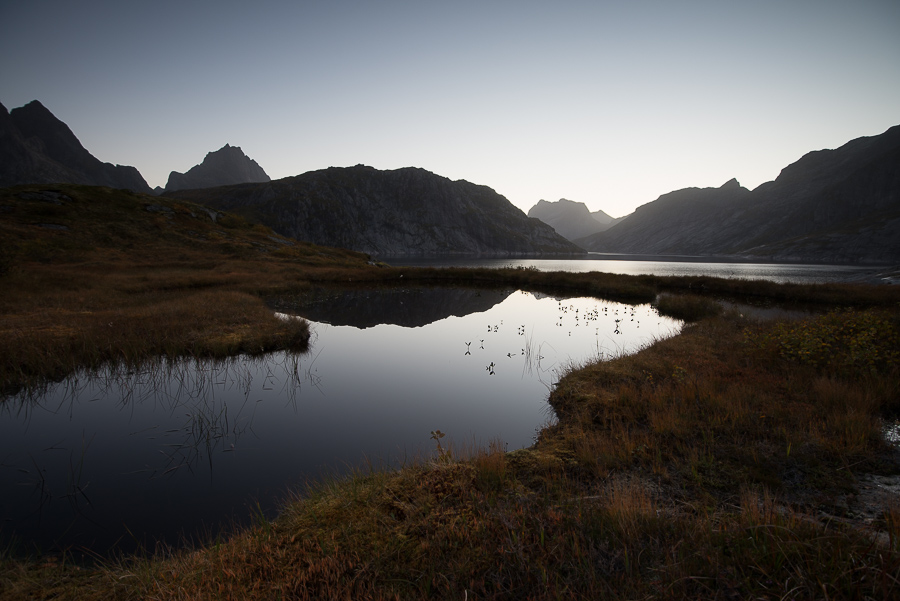 This is a high contrast scene where the sun has just went down behind the mountain. I made sure I did not blow out the highlight areas in the sky and water. To achieve this I had to take control and underexpose the photo slightly. The shadows became very dark, but I knew I was able to fix this in Lightroom later.

To make exposure even more complicated, in digital photography there is one more setting that confuses beginners - ISO. When I learned photography, I used film.

Those who are old enough remember back in the film days the film sensitivity was given as ASA (like ISO in digital). But with film, there were only two settings to play with (aperture and shutter speed). When I loaded a film into my camera, the ASA was set for that entire roll of film.

One of the advantages of digital is you can adjust the ISO separately for each photo you take. It’s an advantage but also another parameter to create confusion because now you have tree setting to consider.

Landscape photography exposure is difficult because the light conditions can be very challenging. It's not possible to modify or move the light, so you need to understand the limitations of your camera and how to work with natural light.

Is the photography Exposure Triangle of any help?

When you start to learn photography exposure, you will soon hear the term Exposure Triangle. The triangle is essential to understand, but it doesn't take into consideration the limitations of your camera. The Exposure Triangle explains how aperture, shutter speed, and ISO are linked together. By combining the three parameters, you can decide which exposure is right for your particular scene.

Is the solution the camera Exposure Modes?

I continued to learn and found no matter what aperture or shutter speed I used I could not get my sunsets evenly lit. Could there be other settings on my camera I was overlooking? I started to experiment with the exposure meter settings. As you might know, more advanced cameras have several ways to set how to measure light. The three most common are:

Matrix/Evaluative:
The camera meters the light from a wide area of the frame in an attempt to expose all parts of the scene evenly.

Center-weighted:
The camera measures the entire frame but assigns more value to the center area. Center-weighted can be a good choice if you place the main subject near or in the center of the composition.

After some trials and error, I realized I could not get an evenly lit exposure no matter how I changed aperture, shutter speed or exposure modes. There had to be a way to deal with this because other photographers got the exposure right, also with sunsets.

The limitations of the camera sensor

Photography exposure is a mystery for many beginners. When you don’t know the limitations, it’s easy to trust the camera too much. All cameras have shortcomings when it comes to exposure.

In a high contrast scene like a sunset, the camera cannot make one exposure where both highlights (the sun) and the shadow (the rest of the landscape) are properly exposed. You must find a “middle way” which means the best possible exposure for the particular scene.

I was struggling with these problems for many years when I used film. The day I bought my first digital camera my whole photography changed. I had a lot of experience developing black and white photos in the darkroom, but with digital I could do the same with my color photos - using Photoshop.

Both film and digital sensors have limitations when exposing high contrast scenes. None of them can directly out of the camera reproduce the scene the same way our eyes do.

How to deal with exposure problems

It took me quite some time to understand my camera had no magical photography exposure settings. The key was post-processing.

Many beginners are not aware the digital sensor can record a considerable amount of data. But the problem is, it’s not possible to see all these data without a minimum level of post-processing.

Most cameras from phone cameras to advanced DSLR cameras can do the post-processing automatically in the camera software before saving the file. As you can imagine, you have little or no control over the result with this approach. It’s like setting your camera in Auto mode when you take the photos. The camera doesn't know what results you want to achieve and thus the result is often not what you expected.

When you leave the post-processing to the camera, you lose a lot of control, and the camera software discards valuable image data. 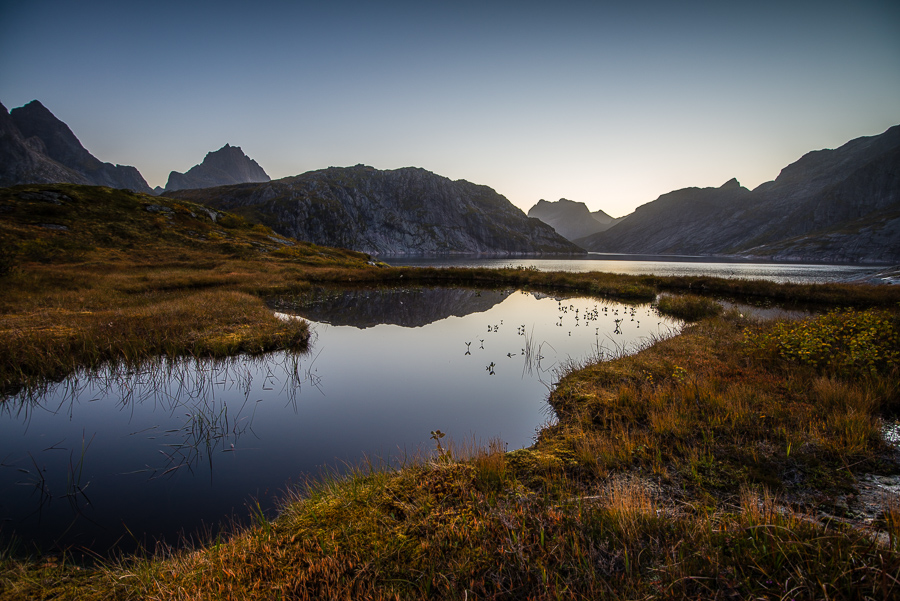 By using Lightroom I was able to darken the highlights in the sky and the water. I was also able to brighten the shadow areas. With these small tweaks I was able to create a totally different photo. The difference between the original out of the camera photo at the top of this article is significant. It is not possible to make these changes without a post-processing software.

Why do some photos “pop” at you when you see them?

There are two main reasons. First, the images are taken under good light conditions and second the photos have gone through some clever post-processing. The only way you can control and adjust highlights and shadows in a photo separately is when you post-process.

In landscape photography, exposure is dependent on how much contrast you have in the scene.

1. Normal contrast scene
You can get away with only adjusting aperture, shutter speed and ISO for a correct exposure. Other post-processing than what the camera automatically does might not be necessary for a satisfying exposure.

2. High contrast scene
The camera is not capable of creating an evenly lit exposure. You have to adjust highlights and shadows separately in a photo editing software.

3. Extreme contrast scene
The camera sensor is not capable of recording data that expose well for both highlights and shadows. In such situations, you should always look at the histogram. When the histogram reaches both ends of the scale and starts to creep up the sides, you have reached the limits of your camera.

It's not possible even with a post-processing software to adjust both the highlights and shadows for a balanced exposure. You must take more than one exposure and stitch the exposures together with HDR software.

Now over to you!
​
What do you typically find most challenging with photography exposure?
Add your comments below.

Please log in again. The login page will open in a new tab. After logging in you can close it and return to this page.

This website uses cookies to improve your experience while you navigate through the website. Out of these, the cookies that are categorized as necessary are stored on your browser as they are essential for the working of basic functionalities of the website. We also use third-party cookies that help us analyze and understand how you use this website. These cookies will be stored in your browser only with your consent. You also have the option to opt-out of these cookies. But opting out of some of these cookies may affect your browsing experience.
Necessary Always Enabled

Any cookies that may not be particularly necessary for the website to function and is used specifically to collect user personal data via analytics, ads, other embedded contents are termed as non-necessary cookies. It is mandatory to procure user consent prior to running these cookies on your website.